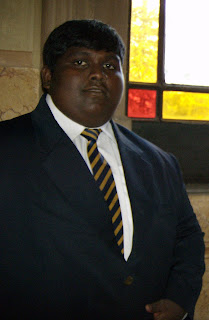 Nalliah Kumaraguruparan Ashokbharan was born on the 15th of September 1989 – a friday night in the town of Jaffna. He is the eldest son of Dr.Nalliah Kumaraguruparan – a Chartered Business Administrator and a Politician and Mrs.Rathee Kumaraguruparan. N.K.Ashokbharan came to the city of Colombo when he was just two months old and he started his kindergarden education at the ‘Havelock Garden Montessori School’ and then his Primary & Secondary education at the ‘Royal College’ Colombo 07.
At school N.K.Ashokbharan engaged in many activities along with his academic engagements. He is a debater & an orator who has won many awards & prizes at manycompetitions. He also captained the Royal College Tamil Debating Team in the years 2007 & 2008. He also proved his ability in drama by winning awards for best acting, best script & direction. He also help post as the Chairman of the Royal College Tamil Literary Association & the Royal College Tamil Debaters’ Council. He was a co-convener of the Royal College Discussion Forum.
N.K.Ashokbharan has proved his leadership abilities at many stages. He was a Primary Prefect of the Royal College in 1999 and then a Junior Prefect in 2003, then a Junior Steward in 2006, then a Senior Steward in 2007 and later the Senior Deputy Head Prefect (2008 / 2009) of the college. He also represented Royal College & Sri Lanka at the World School Forum 2008 held in Busto Arsizio, Italy.
Currently he is pursuing his higher education in the field of Law. He is reading for his LLB at Northumbria University UK.
He is a youngster with ‘new ideas’ and a thirst for a ‘change’ , thus wish to pursue his career in the field of Law & Politics.
-
written by : SV